Panoramic excursion passing from Vassena (205 m) and reaching the Civenna viewpoint (630 m), give us splendid views of the villages lying on the shores of Lake Lecco and on the central part of the Lario. The route passes on asphalted roads, paths and mule tracks, and in the first part we’ll come across some decent slopes, so we recommend starting with trekking shoes and a supply of water. We can reach Vassena by boat (Navigazione Laghi) only in the Spring and the Summer, while the bus service (LineeLecco | Lecco - Bellagio) runs all year round.

From the Vassena jetty we head up towards the Carmine church, turning right onto via Cairoli, and at the next crossroads we find the signs (white and red) of the paths complete with travel times. We follow path 16 to Civenna, and at the top of a concrete ramp we’ll turn left on the stairway that climbs into the woods, passing a group of beautiful villas and after a few winding roads arriving at the deviation for path 14 (Foppa, Alpetto, Magreglio). We then continue to Civenna on path 16, and when the climb becomes less challenging, we’ll skirt along the stone walls that signal the presence of the first houses in the town. Once out of the woods we continue to climb on the asphalted road, and after at the crossroads we’ll turn right into via San Vincenzo and walk along the panoramic Ettore Foschi, reaching the small church of San Rocco at the viewpoint.

The Belvedere of Civenna (630 m) is a panoramic balcony that is completely one-of-kind in the world, a few steps away from which the Monument to the Fallen of Motorcycling and the Monumento degli Alpini start to appear, and there are some metal plaques on the railing that describe the places that we can admire in front of us. We proceed northwards passing throughthe Bellavista park, and after passing a rest area we’ll descend on the path in the direction of Civenna 2 and Gorla. When we reach a wooden gate, we turn right towards the south, where the track gets lost in the meadows and then re-emerges in the woods, and we’ll pass a spring and some farmhouses until we then cross path n.18 which descends towards Vassena. After passing two benches with a panoramic view, we find the deviation for the Madonna del Sumpiazzo (380 m), and the small chapel stands out on a rocky spur overlooking the lake. We’ll retrace our steps continuing the descent on path 18, and once out of the woods we walkalongside some well-kept terraces, and after passing by a wooden bridge we return to the village of Vassena. 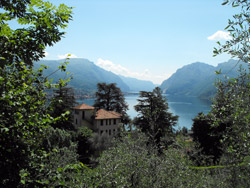 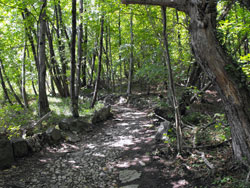 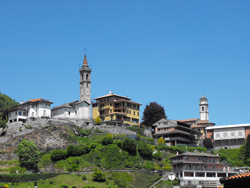 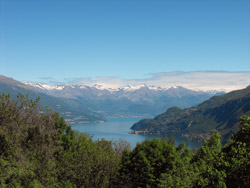 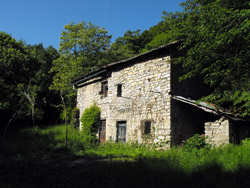 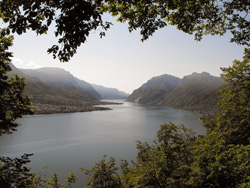 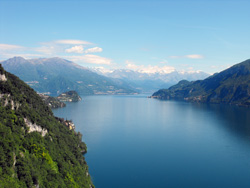 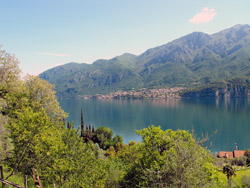 From Gravedona to Gera Lario

From San Fermo to Camerlata