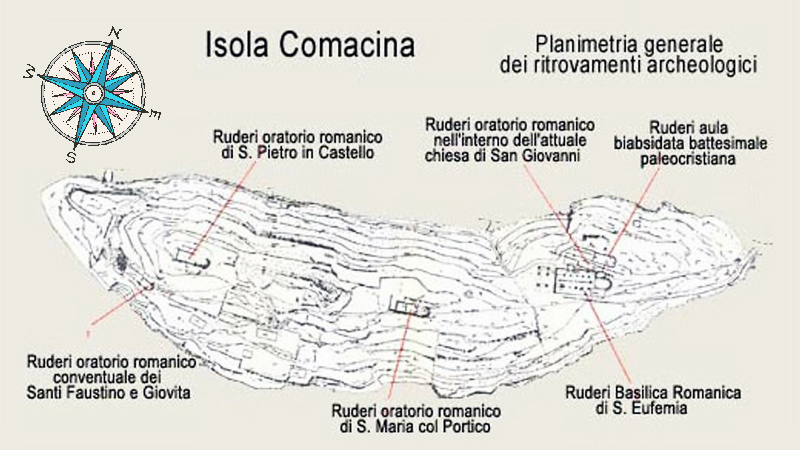 The digs carried out in 1914 on Comacina Island by archaeologist Ugo Monneret brought the remains of the Saint Eufemia Roman basilica to light.

In 1958 a downright Archaeological Digs Campaign was organized: this first research cycle, directed by Luigi Mario Belloni, was able to be realized thanks to the intervention of the Soprintendenza alle Antichità per la Lombardia (Lombardy Antiquities Office) and to the personal interest of Professor Mario Mirabella Roberti.

The dig results did not disappoint the expectation: from October 28, 1958 to February 18, 1959, three religious buildings in three different locations on the island were brought to light: one at the current Saint John oratory (San Giovanni con Battistero), a second on a higher terrace along the back of the Island (Santa Maria col Portico) and a third on the higher plateau, commonly referred to as il Castello (San Pietro in Castello).

The second Digs Campaign, directed by Belloni brought to light in 1962, under the floor of the current oratory, the remains of a Romanesque church.