From Colma di Sormano we follow the path climbs up towards Colma del Piano and Colma del Bosco until reaching the Spessola Alps, and at the crossroads we set off in the direction of the Terra Biotta Alps, one of the most gorgeous panoramas of the entire trip. Once we’ve reached the Bocchetta di Terrabiotta, we have two options: continuing in this way towards the top of Monte San Primo (1681 m.) or heading right towards the Borgo Alps and the Monte San Primo park. To all our hikers, we recommend staking out to hit the top of Monte San Primo and as for heading back down take the extremely direct right (VERY STEEP!), which leads to the Rifugio Martina, while for cyclists we think that it’s much more enjoyable to head down from the crossroads towards Monte San Primo park and the ski slopes.

For going by bike: from the parking area of the ski lifts we descend to the crossroads and turn left, passing the Colonia Bonomelli and before the Alpe delle Ville we take a turn to the right towards Paum where the descent to Rovenza begins. At the fountain of Rovenza we veer left, and after a beautiful panoramic stretch we arrive at a small church, and afterwards we curve to the right and go down into the woods towards Brogno. For those going on foot: from the Martina Refuge we continue downhill for a short distance, and the deviation or detour to the left is written on a rock indicating the path (n.39 Dorsale per Cresta) which leads to Monte Nuvolone (1092 m.). We pass the farmhouses of Colmanetta, and at the Bocchetta di Nuvolone we go around the mountain on the right and we arrive at a splendid lookout over Bellagio and Lake Como, and continuing in this way the long descent towards Brogno begins.

Once having set foot in Brogno we continue on flatland for a short stretch, and just after passing the houses of Begola we shoot down into the woods towards the Mulini del Perlo, where at the fork of the Perlo we take a left onto the path to Cagnanica. After passing the houses of Cagnanica the paved road begins, and we continue down accompanied by terrific views over the hamlet of San Giovanni, positioning us just a few steps from the shores of Lake Como. Once at the Vicolo del Selvetto we turn to right, pass the Perlo stream and arrive in piazza Sant'Andrea di Guggiate where the crossing of the ridge of the Lariano Triangle finds its endpoint. Near the square we can find the bus stop for Como, or in half an hour we can reach the Bellagio wharf and visit one of the most beautiful villages in the world. 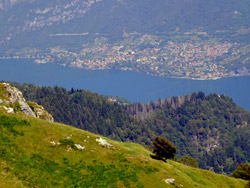 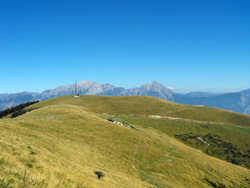 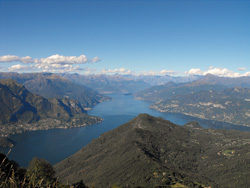 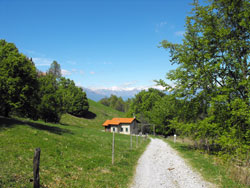 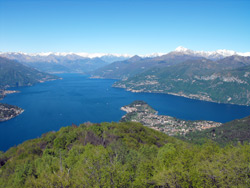 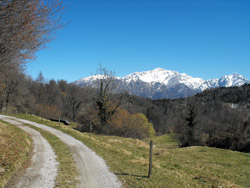 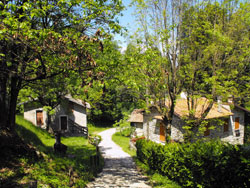 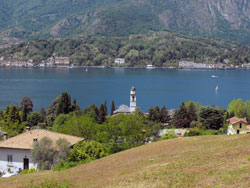 From Brunate to Bellagio