The fifth stage of the Sentiero del Viandante starts at the Sanctuary of the Madonna di Valpozzo in Piantedo and ends in Morbegno near the train station. From the Sanctuary of Valpozzo we continue westward, and after passing the courts of Piodella, Piganzoli and Cà di Pinoli we enter the lower Valtellina. We pass to the right of the Dosso della Scaiola going up to the bridge over the Madriasco stream marking the border between the municipalities of Piantedo and Delebio. After having passed the built-up area of ​​Tavani, the trail climbs into the forest giving us splendid views of the valley floor to the south and the Piano di Spagna to the northeast.

After having gone beyond the rustic buildings and the magnificent clearing of Nogheredo, once at the crossroads we take the road that goes down towards Casale di Delebio. Upon crossing the bridge over the river Lesina, we then enter Andolo Valtellino along the ancient Via Pedemonte and after passing the church we go up into the woods to reach the hamlet of Rogolo. The path leads into the village of Rogolo, offering us the possibility of exploring the religious monuments and ancient fountains, and beyond the stream San Giorgio the town of Cosio Valtellino begins. After passing the houses of Piagno we enter the woods heading towards the ruins of the Abbey of Vallate, at the crossroads we follow the path number 6 in the direction of Dossa.

Steps beyond a beautiful wooded area we cross the Strada Provinciale 7 of Val Gerola, and then we follow it uphill for about 700 meters, and after having arrived near Canleggia we then take the path to the right. Going up to Roncale and arriving in Quiete, the path takes us into the Bitto valley, and once upon having arrived at the church of San Bernardo, we are at the gates of the village of Sacco, where the museum of Homo Salvadego stands. Near the church of San Lorenzo di Sacco we follow the mule track descending towards Morbegno. Once we’ve entered the village and after having crossed the bridge over the Bitto stream, we arrive at the train station past the historic center, where the fifth stage of the Sentiero del Viandante ends. 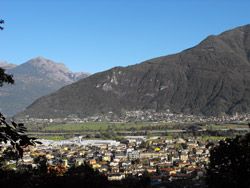 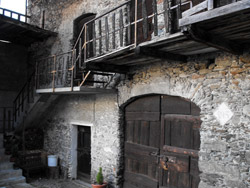 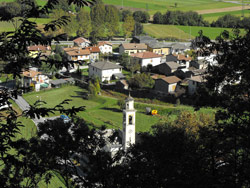 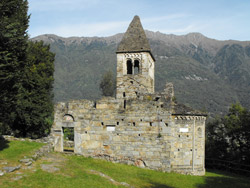 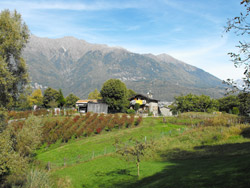 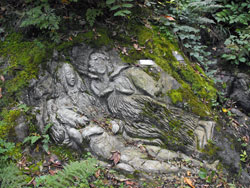 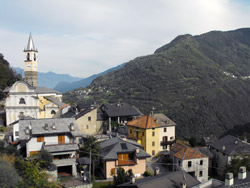 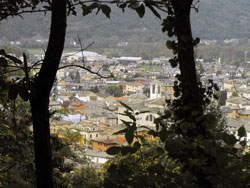