The church of Saint George, easily identifiable by the majesty of the bell tower, rises in the town of Varenna. The church has medieval origins, it was probably built between 1250 and 1300 and consecrated in 1313, the parish comprises three naves, placed on cylindrical pillars and sharp arches.

Of particular interest is the facade, where we can observe the sequence of different architectural styles and a fine sixteenth-century fresco depicting Saint Cristofero. The imposing bell tower dates backs to 1653; the bell tower, built on that original of Romanesque epoch, was restored in 1978. In the nave, above the marble high altar of the eighteenth century, we find a fresco from the Triptych of Saint George and the large wooden crucifix dating back to the sixteenth century. On the sides of the altar there are two frescoes of the fourteenth century depicting Queen Theodolinda and Pope Gregory the Great.

Excellently made is the Deposition of the Cross of the fifteenth century, carved in the coloured stone and placed above the sacristy. In the left nave we can observe two altarpieces, the larger one depicting the Madonna with the Child, around there are fifteen wooden boards depicting some Saints; unfortunately those depicting St. Antonio and St. Lucia have been stolen in 1975. Valuable is the Baroque confessional of the seventeenth century, a work of master cabinetmaker Giovanni Albiolo, native of Bellagio.

Near the church of San Giorgio, over the square towards the lake of Como, we find the Oratory of Saint John the Baptist. The Oratory is an ancient Romanesque church with a single nave, restored several times over the centuries, on the inside there are several frescoes including the Annunciation and the Baptism of Christ, works of the Lombard school of the thirteenth and fourteenth centuries. 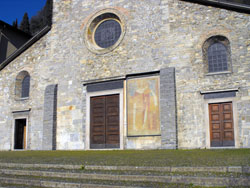 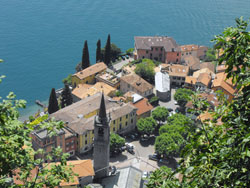 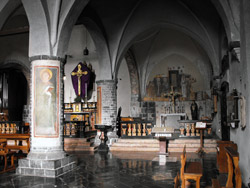 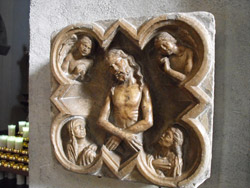 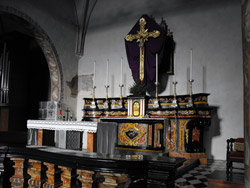 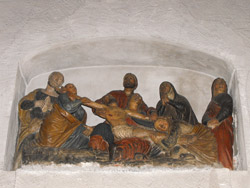 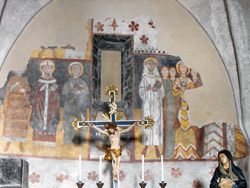 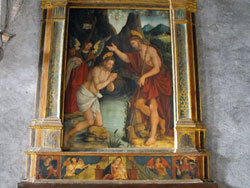