Church of Saints Nazaro and Celso

The church of Saints Nazaro and Celso in Bellano

The Church of Saints Nazaro and Celso, stands in the village of Bellano on the Piazza della Prepositurale, just a few meters from the Ravine entrance. In 1341, the ancient church (at the time dedicated to St. George), was partially destroyed by a swelling of the Pioverna Torrent and was later reconstructed. It was only in the 14th century that the new church was dedicated to Saints Nazaro and Celso.

The church, of a late-Romanesque style, has a façade made of black and white marble strips and a large terracotta and glass rose window. Another prominent element of the façade is the tabernacle with the marble statue dedicated to Saint Ambrose. We can see how the façade of the Church of Saints Nazaro and Celso may be compared - stylistically - to the church of Saint Maria in Martinico of Dongo and to the Piona cloister; all works of maestros from the city of Campione.

The frescoes on the central vault, as well as the two large engraved wooden confessionals and the marble baptistery are valuable. The three-nave interior has undergone various restorations throughout the centuries, especially following the pastoral visits of Saint Charles, to whom is owed the construction of the sacristy and the bell tower in 1567.

Two marble shelves holding the stoups are in the fourth bay in each nave. The fresco portraying the Holy Mother and Child, and Saints Nazaro and Celso was placed in the church in 1960. There is a collection of notable importance rich of ancient liturgical objects and furnishings. 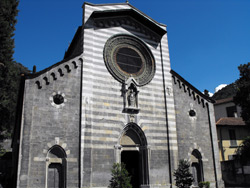 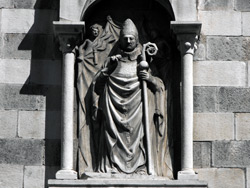 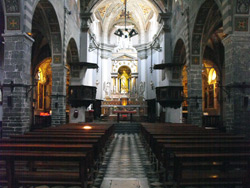 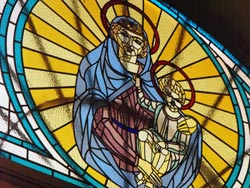 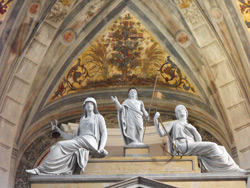 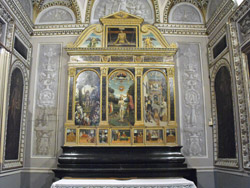 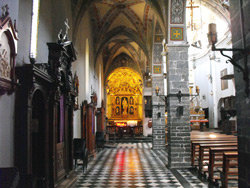 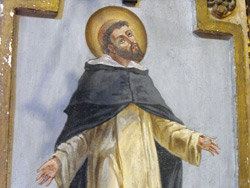