The Sanctuary of the Madonna delle Lacrime

Sanctuary of the Madonna delle Lacrime in Lezzeno

The Sanctuary of the Madonna delle Lacrime springs up in Lezzeno in the municipality of Bellano, right in a splendid panoramic position overlooking Lake Como and the Lombardic Pre-Alps. The events that led to the construction of the Sanctuary began on the 6th of August 1688, when Bartolomeo Mezzera, after a day’s-worth of field work, stopped to pray at a small tabernacle where he suddenly saw the image of the Madonna engraved on a medallion with tears of blood. Completely upset, he ran home to the family to explain what he had seen. When they returned to the temple together with the parish priest, copious tears bathed the Virgin's face, and Don Paolo Rubini immediately alerted the Archbishop of Milan. After thorough investigation, the ecclesiastical authority recognized the event as miraculous.

Two years later the construction of the Sanctuary began. In 1694 the building was completed and in 1706 the plaster medallion of the Madonna was included in a niche positioned behind the altar where it is still preserved today. The sanctuary's baroque style is sober and elegant, and the building features a single nave plan, with three altars positioned throughout—the bigger one being dedicated to the Madonna, the other two in honor of Sant'Anna and San Giuseppe. Inside, exquisite frescoes decorate the walls and domes, and the altars and paintings are adorned with the magnificent black Varenna marble. Outside, along the staircase there are seven niches with mosaics dedicated to the Sufferings of the Blessed Virgin, works created in 1968.

Not far from the Sanctuary, in the exact location where the miracle took place, there is a small chapel, the original tabernacle, and a reproduction of the Immaculate Medallion all of which is still kept on the inside. For over three centuries the Sanctuary of the Madonna of Lezzeno has been a destination for prayer and pilgrimage, with refreshment points and rooms specially dedicated to pilgrims. Every year on August 6th a mass is celebrated for the anniversary of the miracle. 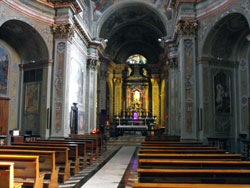 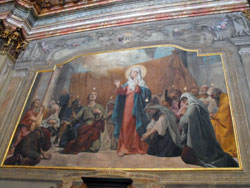 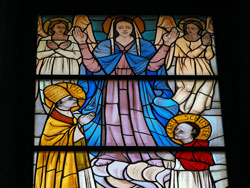 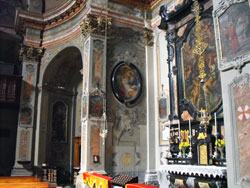 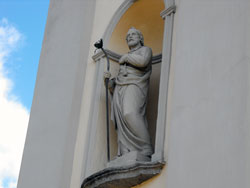 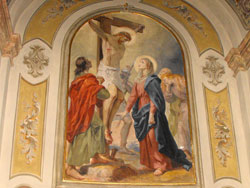 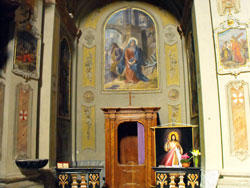 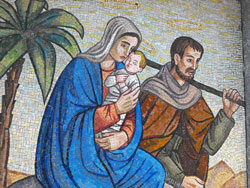