The Fortress of Montecchio North in Colico

Construction work of the fort began in 1911 and ended in 1914. During the First World War (1915/18) Fort Montecchio North, with its huge lateral walls but rather thin ceilings, proved to be unsuitable for taking hits from Austrian mortars; therefore in the middle of the conflict, it was decided to return to the traditional yet more effective defence operations. In 1916/18 a defence line was constructed at the northern Italian border, called Occupazione Avanzata Frontiera Nord (Occupation Northern Boundary Advance) or Linea Cadorna (Cadorna Defence Line). In the Colico area, the line followed the natural defence of the Legnoncino - Legnone mountain ridge, but the dreaded attack from the north by Austria in the Alto Lario area never happened. Fort Montecchio is the only one in Italy, still the same as when it was built. The fact that no one ever fought here allowed the buildings to be perfectly conserved. The structure of Fort Montecchio is made up of three different parts. The shelter: a huge fortified building, partially built into the rock, accommodates the troop dormitory, the company office, the officer's quarters and the armoury.
The corridor: a 140 m., fortified communication trench connects the shelter to the battery. There are holes in the exterior for close defence, while the powder store and projectile depot were dug out of the part built into the mountain. The battery: equipped with 4 Schneider 149/35-mm calibre cannons, is protected by steel domes. They are the largest pieces of artillery in Italy, still in perfect working order. The cannons are located on the upper floor of the fortified building, and kept the Pian di Spagna and all of Alto Lago under fire. In the command room, an intercom similar to that on a ship, allowed the sending of orders to the cannon turrets. In the years between the two world wars, the Fort was always manned, and the cannons maintained in working order. In 1939, it was entitled to Lieutenant Aldo Lusardi.
The Fort was at the centre of Italian history when on April 26, 1945, it was handed over to the Partigiani (resistance fighters), who fired a few shots toward the other side of the lake, stopping the German convoy hiding Benito Mussolini. After that, Fort Lusardi was used as a powder stock, then abandoned. Today, the town of Colico, which allows it to be visited, manages Fort Montecchio. More information tel. +39 0341 940322 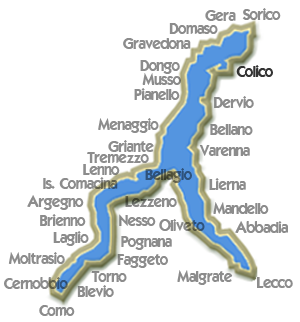 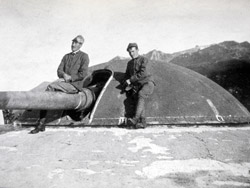 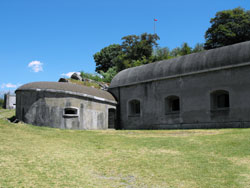 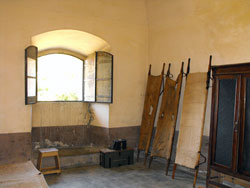 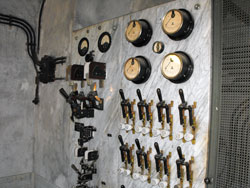 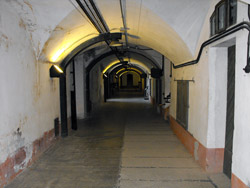 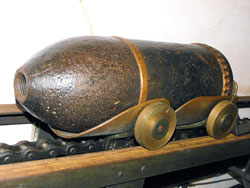 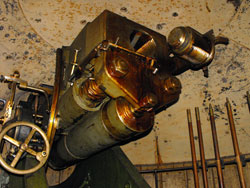 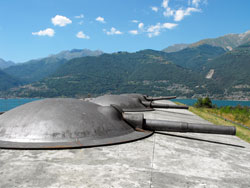