The name comes from a colossal elm tree, according to legend planted by Plinio il Giovane, which in the past, embellished the villa's park. The original, neo-classical architecture (central part), was designed by Simone Cantoni of Muggio (Canton Ticino) in the late 1700s. At the hands of the first owner, Innocenzo Odescalchi, other architectures followed which enlarged the building, adding the wings, even without altering the stylistic vault.

Among the illustrious guests we point out Napoleon and Garibaldi. Today, the villa belongs to the Comune di Como, which, after restorations, used it as a location for cultural events.

The main façade, turned towards lake Como is made up of a median part (the original villa) measured by columns and pilasters and surmounted by a terrace with statues, and by two lateral wings.

The limited size of the exterior is transformed, on the inside, with the profusion of ornaments: stuccoes, gilding, statues and frescoes of artists from the late 1700s and early 1800s.

Standing out, among the various rooms, is the small theatre (1883) with seating for 92 people and frescoes by Fontana. In the park we find a small, neo/classical temple and a small brook.

In the centre of the garden, facing the villa stands a fountain with two children playing with a marine monster, work of sculptor G. Odofrechi. The penthouse is dedicated to an exhibition of designs by Como architect Antonio Sant'Elia 1886-1916, the first advocate of futuristic architecture. 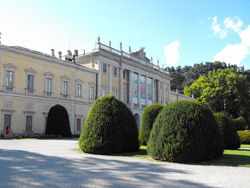 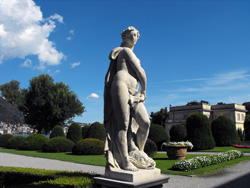 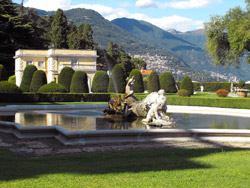 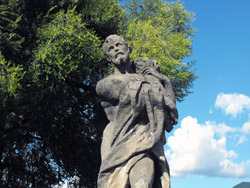 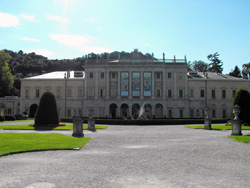 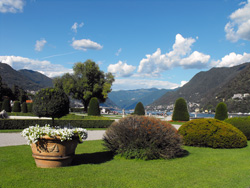 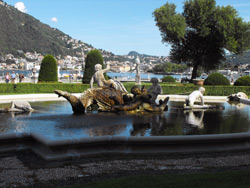 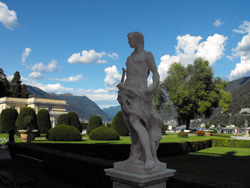