Church of San Martino and Sant’Agata in Moltrasio

The Borgo area of Moltrasio is home to the parish church of San Martino and Sant’Agata, which enjoys a magnificent panoramic location on the banks of the south-western end of Lake Como. A single nave structure with four side chapels, archaeological remains discovered in the shaft of its imposing bell tower indicate its Romanesque origins. The earliest historical reference to the church dates back to 1207. In a record of a pastoral visit he made to Moltrasio in 1589, Bishop Ninguarda of Como describes a fairly small building with two altars, one dedicated to San Martino and the other to the Virgin Mary. Also described in the document is the most precious work of art conserved in the church - the wooden altarpiece by the sculptor Alvise de Donati, made in 1507.

Significant restoration work was carried out on the church between 1589 and 1647, with the addition of two side altars and fine frescoes of Saints Martin and Agatha executed by the Recchi brothers, who were also responsible for the three medallions on the apse illustrating the life of Jesus. In the chapel of the Holy Thorn (Cappella della Sacra Spina) and above the main altar we may observe paintings by Giovan Mauro Della Rovere (1575 - 1640), also known as Il Fiamminghino. Meanwhile, the beautiful chapel of the rosary (Cappella del Rosario) contains seventeenth century paintings, as well as two frescoes from 1944 by Eliseo Fumagalli and an interesting Crucifixion with Saints painted in 1520 by Giovan Andrea De Magistris.

The chapel of Crucifix also houses the Holy Thorn, a relic brought here in 1721 by the abbot Giuseppe Antonio Durini, as well as containing frescoes illustrating the life of San Francesco and San Carlo that are in all likelihood by Francesco Carpano (1613 - 1649). In 1935, the church was expanded with the creation of two small chapels and the external facade in Moltrasio limestone. Recent restoration work has focused on the facade and the external walls of the church. 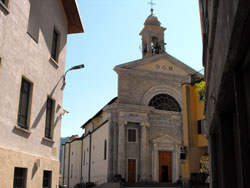 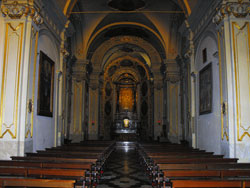 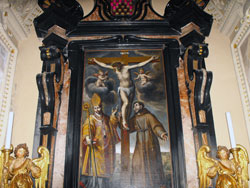 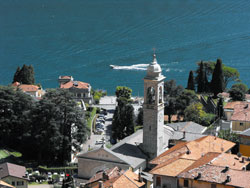 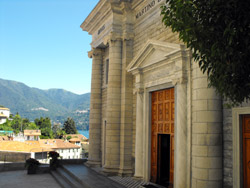 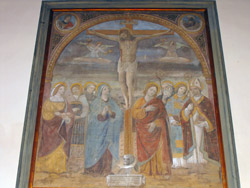 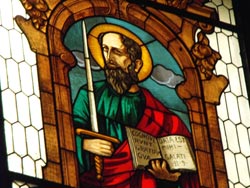 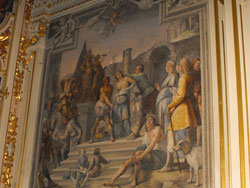